I woke up yesterday morning and took the dogs downstairs and sent them out for their morning constitutional and went to examine the spider web that has been constructed around my door frame. It’s quite impressive and requires that tall people move out of the way to avoid hitting it.

As we live by a farm, we have a lot of spiders. A lot. So seeing one set up shop doesn’t surprise us and more often then not we leave them be, as we did this one.

But that may change after yesterday. 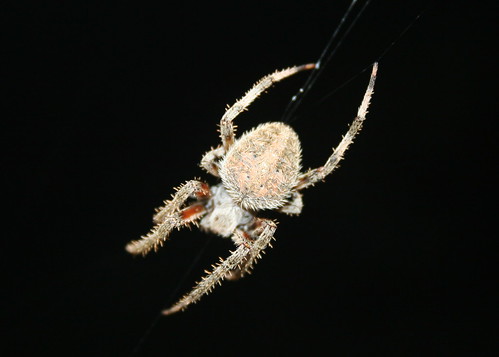 I noticed the spider was out of his web and crawling on the ground, but when he saw me he sped back up into the web and over top the exact center of the doorway.

To get back inside I now need to walk underneath his current position, so I decide to do so quickly to avoid any confrontation, and no sooner do I move into the doorway area, does the spider leap from the frame of the door and in my direction.

I’m a big guy, but man, I moved fast, and successfully avoided the spider.

But the quick movement caught Scout’s (my puppy) attention and she came running to the doorway. The spider was now on the ground, but still connected via web line to the door frame.

As Scout ran through the door, the web line hit her shoulder and swung the spider into the air and over her back. Scout saw this and spun around and ran in the direction of the spider, but the spider – still attached to her – spun around behind her and was now being dragged. After about 4 feet the web broke and the spider lay in a curled up ball not moving.

I left the spider alone and took the dogs for a walk and almost 2 hours later the spider was still in its same curled up position, and by me at least, assumed dead.

I felt bad, but the spider involved himself in a battle he wasn’t going to win, so I continued on to work.

I come home that night, and the spider is completely gone from its stunned position, I assume he has been eaten, and the web is empty and in disrepair, and again the next morning – no spider and still an empty web.

And then last night, lo and behold –

He’s back and as ugly as ever. I think he may have earned himself a reprieve because of his trying few days, but if that web creeps any more into the doorway, we are going to have an issue, and he will be relocated to the trees.